PROFILE
Nobuo Sayama was born in Kyoto prefecture. After graduating from Kyoto University Faculty of Engineering, Department of Polymer Chemistry in 1976, he joined TEIJIN LIMITED. From 1987, he worked for Mitsui Bank (currently, Sumitomo Mitsui Banking Corporation) and handled M&A related business. In 1994, he earned an MBA from New York University. In 1999, he received his doctoral degree (PhD) from Tokyo Institute of Technology, Graduate School of Decision Science and Technology. In 1998, he co-founded Unison Capital, Inc., an investment fund, and in 2004, GCA (currently, GCA Savvian). In 2004, he was an associate professor of Hitotsubashi University Graduate School of International Corporate Strategy (and a professor in the following year). In 2007, he co-founded Integral Corporation. Since 2009, he has served as visiting professor of Kyoto University Graduate School of Management. In September 2015, he was appointed as the Chairman & Representative Director, Skymark Airlines Inc. He has written a number of books, including "Buyout", "Presidential Caliber", "Value of CEO", "M&A and Governance", etc.

Nobuo Sayama, Representative Director & Partner of Integral Corporation, a graduate of Kyoto University Faculty of Engineering, has a unique business background. After graduation, he joined TEIJIN LIMITED and was involved in the development of polyester, however, he made a career move to Mitsui Bank (currently, Sumitomo Mitsui Banking Corporation).
"When I turned thirty, I felt that I was probably not cut out for working for a large company", he said.
He then started studying for the bar exam, but one day, he happened to find a classified ad for mid-career recruitment that Mitsui Bank had placed in a newspaper. He applied for the job because he was curious to know what the bank's assessment of an engineer like him would be. He was invited for an interview and learned about M&A for the first time at the interview. He became interested in M&A and decided to change jobs. He ended up leading the M&A unit at Mitsui Bank and later become among the first to set up an investment fund in Japan.
His life has been a series of choosing something interesting and trying something new. During junior high school and high school time, he was dedicated and committed to baseball and spent all his time practicing baseball except only for the first three days of every New Year. However, he said he has a feeling of something unfinished regarding the days he spent at Kyoto University.

After losing in the top eight of the regional preliminary games to participate in Koshien (the annual National High School Baseball Championship) during the summer of his third-year in high school, he started studying for university entrance examinations in earnest in around early November. He couldn't get into his first choice course, architecture, by a narrow margin, and decided to enter his second choice, high polymer chemistry.
He was invited by a senior student to join the baseball club. He took part in games although he was a freshman, however, he decided to take the entrance exam for the architectural course again. He thought he would regret it if he did not try, so he quit the team. "I was not accepted. I had to study for the exam but at the same time I had to take credits of liberal arts. Regardless, I was satisfied".
After that, he tried to return to the baseball club, but was rejected. He was told that they were not able to readmit a person who had quit.
"I gave up quickly since I had no choice. I spent time doing nothing during my sophomore and junior years; I didn't join another club or work hard at part-time jobs".
He wished he had found something he could devote himself to. That's the reason why he wished to relive his campus life again. "However, thanks to those two years, I can run full pelt so that I won't have any regrets later". 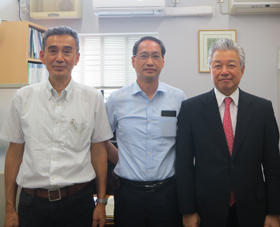 Appreciate the favorable environment
Play baseball to the full

At that time, the intercollegiate baseball league in Kansai applied the principle of promotion and relegation, and Kyoto University Baseball Club was in the lower division, the Keiji League. "The teams of the current Kansai Big Six Baseball League are fixed. They can play games in a good stadium with strong teams. If I were in the same environment, I would have continued playing baseball in the team by any means."
He is watching the baseball club's development, including producing the first professional baseball player and establishing the Baseball Club Support Fund.
Mr. Sayama donated a professional-caliber pitching machine to the team in 2014. He wants students to be aware that they can play in a favorable environment and try to practice hard focusing on and appreciating the present moment.
Finally, in December of his junior year, he rejoined the baseball team. However, after rejoining the team, he pulled a muscle, and he told us that he does not have many good memories. Meanwhile, one of the remarkable things was an away match against a semiprofessional baseball club. At the factory which many alumni worked for, the team members were received with a warm hospitality. "We appreciated the value of seniors. It was an experience we could have thanks to baseball".

Not forming a group, not doing the same thing as other people
"Unique" is the charm of Kyoto University

Mr. Sayama feels Kyoto University's academic culture is wonderful. "At the bank I worked for, I was surprised by the unity of groups of people from the same university (eg. the Keio group). Meanwhile, unlike graduates from other universities, Kyoto University graduates are self-sufficient and don't do the same thing as other people. This spirit and mind may be the reason why Kyoto University produced many Nobel Prize laureates", he said.
However, Kyoto University graduates who are said not to gather together in groups recently form groups. Although they are small, they strongly trust each other. "After all, we love Kyoto University. We may be proud of being different from other university graduates. Accordingly, if there is an opportunity, we will gather together and probably will want to support the Kyoto University Foundation".
Mr. Sayama teaches at Kyoto University. He hopes sharing a variety of his experiences will be helpful for students. "After graduation, you may meet an obstacle. In such case, you will need to have the "strength" to overcome such an obstacle. If you have experience of devoting yourself to something, that builds and thickens your core strength and encourages you to move on. Something like playing baseball all the time is fine. I hope they will spend their campus life to the fullest without having any regrets of their time at Kyoto University which is "unique" in a good sense". 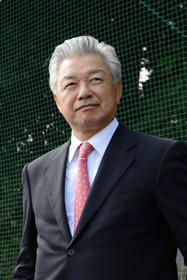